PHP is a complex piece of machinery whose lifecycle really should be understood by anyone who wants to understand how PHP operates. The main sequence is as follows:

PHP starts up. If running CLI or FPM, it’s C main() is run. If running as a module into a webserver, like using the apxs2 SAPI (Apache 2), PHP is started up just a little bit after Apache itself starts up and comes to run the startup sequence of its module which PHP is one. Starting up, is called internally the module startup step. We also abbreviate it as the MINIT step.

Once started, PHP waits to handle one/several requests. When we talk about PHP CLI, there will be only one request: the current script to run. However, when we talk about a web environment- should it be PHP-FPM or webserver module- PHP could serve several requests one after the other. It all depends on how you did configure you webserver: you may tell it to serve an infinite number of requests, or a specific number before shutting down and recycling the process. Every time a new request arrives to be handled, PHP will run a request startup step. We call it the RINIT.

The request is served, some content is (probably) generated, OK. Time to shutdown the request and get prepared to eventually handle another one. Shutting down a request is called the request shutdown step. We call it the RSHUTDOWN.

After having handled X requests (one, several dozens, thousands etc..), PHP will finally shut down itself, and die. Shutting down the PHP process is called the module shutdown step. We abbreviate it as MSHUTDOWN.

If we would have drawn those steps, that could give something like this: 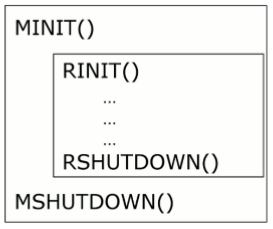 To handle several requests at the same time, you need to run a parallelism model. There exists two of them in PHP:

With the thread-based model, every PHP interpreter is isolated into a thread, using a thread library. This model is mainly used under Microsoft Windows OS, but can be used with most Unixes as well. This requires PHP and its extensions to be built in ZTS mode.

Here is the process-based model: 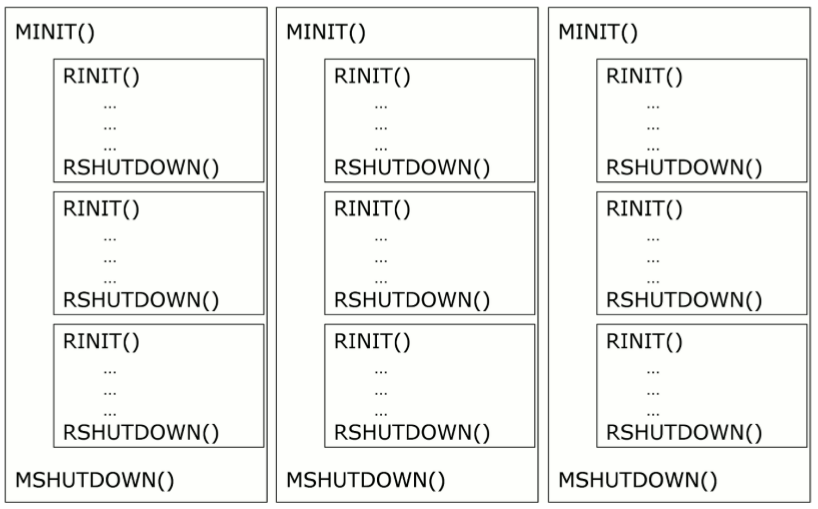 And here is the thread-based model: 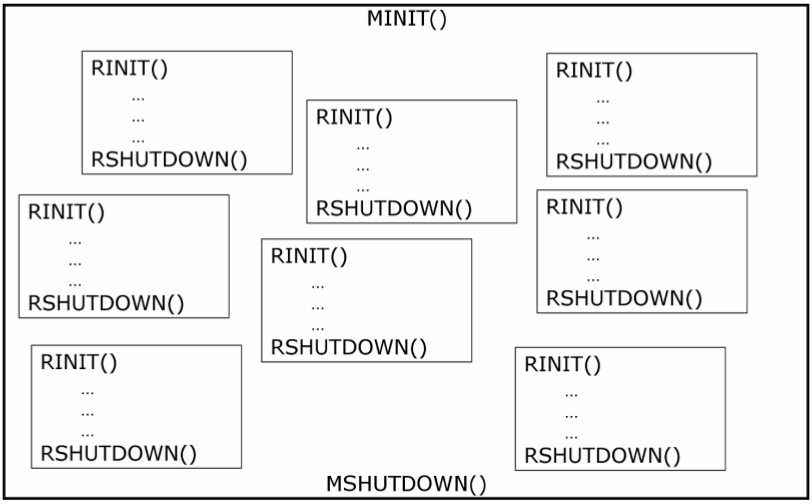 As you could have guessed, the PHP engine will trigger your extension at several lifetime points. We call those hook functions. Your extension may declare interest into specific lifetime points by declaring function hooks while it registers against the engine.

Those hooks can clearly be noticed once you analyze a PHP extension structure, the zend_module_entry structure:

Let’s now have a look at what kind of code you should write in any of those hooks.

This is PHP process startup step. In your extension’s MINIT(), you’ll load and allocate any persistent object or piece of information you’ll need for every future request. For the big part of them, those allocations will target read-only objects.

In MINIT(), no thread or process has popped yet, so you may fully access global variables with no protection at all. Also, you must not allocate memory that is request-bound, as a request has not started yet. You never use Zend Memory Manager allocations in MINIT() steps, but persistent allocations. No emalloc(), but pemalloc(). Failing to do that will lead to crashes.

At MINIT(), the execution engine is not started yet, so beware of not trying to access any of its structure without special care.

If you need to register INI entries for your extension, MINIT() is the right step to do that.

If you need to register read-only zend_strings for further usage, it is time to do so here (with persistent alloc).

If you need to allocate objects that well be written to while serving a request, then you’ll need to duplicate their memory allocation to a thread-specific pool for the request. Remember that you can only write safely to global space while into MINIT().

This is PHP process shutdown step. Easy enough, you basically perform here the exact opposite of what you used in MINIT(). You free your resources, you unregister your INI settings, etc..

As you don’t live in a request here, you should not free resources using Zend Memory Manager efree() or alikes, but free for persistent allocations, aka pefree().

A request just showed in, and PHP is about to handle it here. In RINIT(), you bootstrap the resources you need to handle that precise request. PHP is a share-nothing architecture, and as-is, it provides memory management facilities.

Also, take great care not to write to global space here. If PHP is run into a thread as chosen parallelism model, then you’ll modify the context for every thread of the pool (every other request handled in parallel to yours) and you could also trigger race conditions if you don’t lock the memory. If you need globals, you’ll need to protect them.

This is PHP request shutdown step. PHP just finished handling its request, and now it cleans up part of its memory as the share-nothing architecture. Further request to come should not remember anything from the current request. Easy enough, you basically perform here the exact opposite of what you used in RINIT(). You free your request-bound resources.

As you live in a request here, you should free resources using Zend Memory Manager efree() or alikes. If you forget to free and leak, on debug builds, the memory manager will push on process stderr a log about the pointers you are leaking, and it will free them for you.

To give you an idea, RSHUTDOWN() is called:

This hook is rarely used. It is called after RSHUTDOWN(), but some additional engine code runs in-between.

This hook is very rare to use. It is triggered a little bit after RSHUTDOWN(), by zend_post_deactivate_modules() in php_request_shutdown() function.

This hook is called every time a thread is popped by the Threading library. If you use processes as multi-processing facility, this function is called only once, while PHP is starting up, just before MINIT() gets triggered.

Not providing too many details here, you simply should initialize your globals here, usually to the value zero. Globals management will be covered in its dedicated chapter.

Remember that globals are not cleared after every request. If you need to reset them for every new request (likely), then you need to put such a procedure into RINIT().

This hook is called every time a thread dies from the Threading library. If you use processes as multi-processing facility, this function is called only once, as part of PHP shutdown (during MSHUTDOWN()).

Not providing too many details here, you simply should de-initialize your globals here, usually you have nothing to do, but if you allocated resources while constructing globals (GINIT()), here is the step where you should release them.

Globals management will be covered in its dedicated chapter.

Remember that globals are not cleared after every request; aka GSHUTDOWN() is not called as part of RSHUTDOWN().

That hook is special as it is never triggered automatically by the engine, but only when you ask it information about an extension. The typical use case is a call to phpinfo(). This function is then run, and it is expected to print into a stream special information about the current extension.

The phpinfo() panel information, in short.

This function can also be called through the CLI, using one of the reflection switch such as php --ri pib or via userland with a call to ini_get_all() f.e

You may leave it empty, in such a case only the name of the extension is displayed and nothing more (possible INI settings are not displayed as this happens as part of MINFO()). 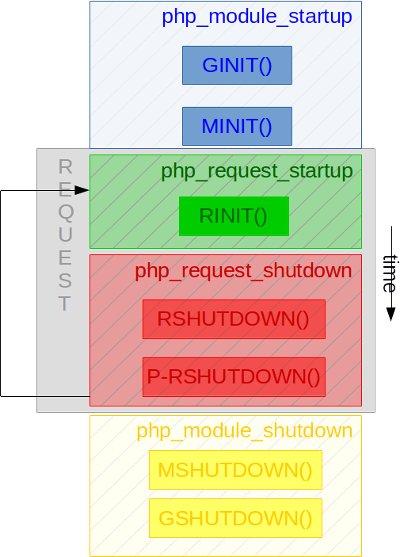 As you may have spotted, RINIT() and RSHUTDOWN() are especially crucial as they could get triggered thousands of times on your extension. If the PHP setup is about Web (not CLI), and has been configured so that it can handle an infinite number of requests, thus your RINIT()/RSHUTDOWN() couple will be called an infinite amount of time.

We’d like to once more get your attention about memory management. The little tiny byte you’ll eventually leak while handling a request (between RINIT() and RSHUTDOWN()) will have dramatic consequences on fully loaded servers. That’s why you are advised to use Zend Memory Manager for such allocations and be ready to debug your memory layout. PHP will forget and free the request memory at the end of every request as part of the share-nothing architecture, that’s PHP’s internal design.

Also, if you crash with a SIGSEGV signal (bad memory access), you crash the entire process. If the PHP setup was using threads as multi-processing engine, then you crash every other thread with you, and could even crash the webserver.

The C language is not the PHP language. Using C, errors and mistakes in your program will highly probably lead to a program crash and termination.

Now you know when the engine will trigger your code, there exists also noticeable function pointers you may replace to hook into the engine. As those pointers are global variables, you may replace them into MINIT() step, and put them back into MSHUTDOWN().

Those of interest are:

Other exists but the above ones are the most important ones you could need while designing PHP extensions. As their names are self explanatory, there is no need to detail every of them.

If you need some more information, you can look for them into PHP source code, and discover when and how they get triggered.